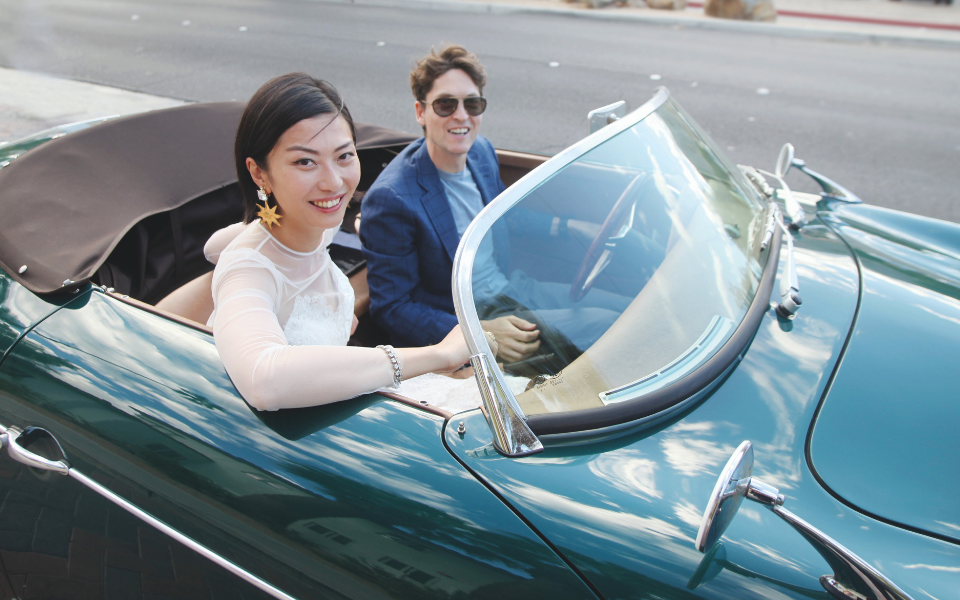 Laura Cheung and James Wolf wed in a wildly creative Palm Springs ceremony that melded Old Hollywood charm with eclectic chinoiserie decor. This is one wedding not easily forgotten. If you’ve ever set foot in the creative interior design and furnishings den that is Lala Curio in Wan Chai’s Sau Wa Fong, you’d know not to expect a typical white wedding from its owner, Laura Cheung. There’s a veritable treasure trove of curiosities and an almost theatrical aesthetic inside the much-loved artisans’ paradise that champions the march-to-her-own-beat founder’s personality.

It was therefore unlikely that Laura’s wedding to beau James Wolf would have been run-of-the-mill in any sense of the phrase. This was a ceremony filled with colour, verve and personality—and just a small dash of circus-style hijinks—at Cary Grant’s estate in Palm Springs, California. Laura and James first met at a dinner party that Laura threw at the Happy Valley racecourse. James had set his eyes on Laura then, but she was unavailable. However, the timing worked out better for the couple a few years later, when they bumped into each other at brunch.

“He was with a really handsome friend,” says Laura. “My girlfriend was checking out his friend, so I invited James and his friend to dinner so that I could put the two of them together.”

While Laura played matchmaker, James saw this as the perfect opportunity to start a courtship, a race that took him around the world from Hong Kong to Macau, Okinawa, and New York City.

The proposal came three years after the couple got together, while they were on a hike up Mount Hinode in Tokyo. “I was hungry and grumpy and was like 'Why are you making me walk so far?'" says Cheung. "But on the top there was a stunning view and he proposed. I had a can of sake, so I popped the sake and went 'Yeah!'"

The wedding was held a year later, after location scouting across three continents. Japan, where the groom used to live, was the first choice but it was nixed due to the size of the party and the inconvenience of everyone getting there. Sting’s house in Italy become a possible second option but that was left by the wayside too because, according to Laura, “we have no particular ties to Italy and we would be choosing a destination that didn’t have a place in our story.”

The couple finally decided on Cary Grant’s former estate, Villa Paradiso, in Palm Springs. It had never been rented out—in fact, it was for sale. “James’ grandfather was a navy admiral,” says Laura. “He was an American war hero and Cary Grant had been in a Hollywood movie called Operation Petticoat honouring James’ grandfather, Admiral Dempsey, and the owner thought the story was quite funny and decided to rent it to us.”

Laura had plenty of event-planning experience from her days working in New York in the fashion industry and she knew exactly what she wanted, so the couple hired a planner simply to make the magic happen. BEFORE THE BIG DAY

The welcome dinner, held at the Colony Palms Hotel, was a poolside party featuring eclectic bohemian decor inspired by the palette of Dries Van Noten, including man-sized flowers and fairy-lit teepees flanking a giant neon sign that read “Lala Wolf.”

Guests dined on tacos as they waited for a performance by a mariachi band… which never showed. Luckily, though, unbeknown to the bride, her girlfriends had a surprise performance planned, doffing their pre-bridal best in favour of T-shirts and jeans for a choreographed dance to hit song Despacito.

The next morning, Laura had close personal friend Phil Blandow take portraits inside and around the estate before the tea ceremony with the family and then, later on, during the exchange of vows. Laura’s father walked her down the aisle as her bridesmaids sang Can’t Help Falling in Love.

“An hour before I had to walk down the aisle, I was super nervous—I-couldn’t-breathe nervous,” says Laura. “Do I smile? Am I serious? Luckily the sun was literally glaring in my eye, like when you’re on stage with a spotlight on you, and then you’re not scared because you can’t see anyone. And then I could see my husband in front.”

In vows that they wrote themselves, Laura says she promised “to pick up our dog Foxxy’s poop because normally James does everything.” She says everyone laughed at that. “It made it personal and lighter.”

The first official performance of the wedding followed the ceremony as five synchronised swimmers jumped into the pool to entertain the onlooking guests. “It’s so Old Hollywood,” says Laura. “For me, at an event, the entertainment is really important to break the time up. You want a wow factor here and there. It really makes people happy and keeps the spirits high.”

At dinner, the couple walked in and were greeted by an explosion of confetti before a DJ-violinist, who was perched three storeys high and balanced on a sway pole, played a rousing set that had guests old and young beaming with surprise and excitement. The decor was, as expected, Lala to the max. “Lala Curio is very much my personal aesthetic,” says Laura, “and I wanted to be able to display some of our haute crafts we’ve worked so hard on.” This meant agate or rock-crystal-tree centrepieces, five styles of chinoiserie tablecloths and objects that included little tiger place-card holders and napkin rings shaped like pagodas. “We also deliberately put all our friends not next to each other,” adds the bride, “so that people really mingled, which they appreciated.”

As a health nut, James ensured all the food was organic and locally sourced, and the menu noted which farms the produce hailed from. The couple’s friends at Smyle Foods made healthy paleo gluten-free desserts—so there was no cake. “We didn’t want anything too conventional,” says Laura. Besides the performances, “the speeches were incredible,” enthuses the bride. “I don’t know what happened. The Wolf side all speak so well. But for the Cheungs, it’s not our turf. We were in America with a lot of their friends—but my dad totally killed it. Everyone said they were going to open up a stand-up comedy TV channel for him.”

The after-party was held at a tiki-themed gay dive bar, with hilarious drag queens on hand to entertain. “I’d never seen them before and they were beyond funny—so inappropriate,” laughs Laura. “Our parents and their friends were there and they thought it was hilarious too. People were dancing up a storm.”

Though a far cry from the bride’s original plan—to build a makeshift music festival based on Coachella, in the desert—the dive bar was, she admits, the right decision in the end. “I really enjoyed myself,” she says. “People always say you’ll be so worried making sure things are okay and that people are doing okay but I totally just enjoyed myself 100 per cent.”

Newsletter Signup
Back to Top